You are here: Home / Gardening / 3 Common Garden Pests in the Phoenix Area

The most challenging part of gardening is, I believe, managing any pest infestations. They can make short work of a beautifully growing garden. It is important to be vigilant, and catch them early! I decided to put together this post of common garden pests that I’ve had to deal with so far, and how I’ve been treating them. To be fair, I am no entomologist. So I may not have my species identified correctly. However, I am including pictures so you can make your own assessment 🙂 Hopefully this post will help someone else who finds themselves with a similar problem.

I have definitely encountered my fair share of garden pests in my gardening journey so far. When Hubby and I were living in our condo we tried our hand at some patio gardening. There was certainly some harvest, but at one point the tomatoes were nearly decimated by cabbage worms. And the cilantro, parsley, and lettuce were smothered by aphids before we ever got a chance to really enjoy them. I’ve been afraid that all my hard work this season might suffer the same fate. I am happy to report, however, that we have been enjoying lettuce, kale, swiss chard, and more. And the tomatoes are doing splendidly, with the first batch just harvested this weekend!

Because of my past garden pest experiences I’ve been on hyper-alert, which may be helping. I’ve been checking the garden nearly daily, turning leaves over, keeping an eagle eye out for any leaves that don’t look right. So far I have come across 3 common garden pests that have been particularly troublesome here in my low desert garden. Thankfully, so far I’ve caught all of them in time, before they had a chance to completely ruin any of my plants. (Fingers crossed!)

Pale green aphids on the lettuce. These guys showed up as soon as the weather started to warm into the 80s in mid-April. They cluster at the base of the leaves and around the stems. I treated by spraying with Neem Oil every 1-2 weeks, gauging my treatments by the size of the colonies. Once they grew to more than a few here and there I would spray again. For me this season, this kept them at bay so that they were not able to take over any of the plants. We enjoyed a bountiful lettuce harvest!

These same pale green aphids also started showing up on the Kale once the day time temperatures rose over 100. They particularly clustered on the new leaves just starting to come up from the center stalk. Treatment so far is to spray the leaves off with water, smashing the little aphids as I rinse, and then treating the plants sparingly with Neem Oil.

White aphids on the kale. These started showing up early on – February/March, but were just one or two scattered bugs. At the time, they didn’t seem to cause any harm to the plants, so I let them be. However, as it warmed up into the 90’s consistently, their colonies started growing out of control. You can identify a problem spot because the leaves on the kale, where these aphids are clustering, will curve in our out around the colony. They don’t seem to be preferential to the surface or underside of the leaf either.

To treat, I clipped off the worst-affected leaves to prevent more spreading, and then sprayed with Neem Oil 1-2 times a week. The Neem Oil didn’t seem as effective on these white aphids as it was on the earlier green variety, so something else may work better. I’ve read that a homemade combination of castor soap, cayenne pepper, and garlic might be a good organic solution. If I decide to mix some of that up I’ll let you know how it works.

These worms are small but mighty. They are the larvae from the common white cabbage moth. These moths lay their eggs on the underside of leaves. Once they hatch they start to nibble, and boy do they grow fast! Once they’ve grown, they will build their own cocoon on one of the leaves, and the cycle begins all over.

How to spot them

Even before these worms are big enough for you to see, they will pepper a leaf with holes. They can decimate an entire plant in a matter of days, so if you don’t catch them early the damage is real. They started showing up in my garden in mid-April, as soon as the temperatures were in the mid-80s. The best way I have found to spot them is just to keep an eye out for any leaves with holes – even if the holes are tiny, chances are that is from a larvae just hatched and beginning to grow.

I also found them on my carrots this year! They blend in with the stems soooo well, but my leafy carrot tops started to disappear so I knew something was up. Sure enough, after spraying things down one morning, the water disturbed them and I found them reaching out away from the stems. Needless to say that was their last breakfast on my carrots!

What to do about them

Once I knew these worms were around, I started checking the undersides of my leaves daily. The best way I have found to get rid of them is to simply find them and remove them – drop them into a cup of soapy water, or just smash them. The more you hunt, the better you will be at spotting them (trust me)! If you can catch them when they are small, then the plant should be able to recover just fine. It’s when they’ve been going at it for a few days before you find them that they can really start to take a toll.

Check out the damage that even the little tiny cabbage worms can do. This was a kale plant where I just discovered new larvae hatched. There are three on the leaf (can you find them?), they are tiny, and the leaf is chalk full of holes.

There are a few other leaf diseases that I have had pop up. The first one was early in the season, and affected one of my kale plants in particular. I’ve also had it show up on some of the chard as the weather has warmed. I believe it was white spot mildew, but I have had trouble really confirming. If you know what this is, please leave a comment confirming or correcting my assessment!

Basically, spots appeared on the leaves, the undersides turned white, and then the spots began to spread and dry out. I found that just cutting off the diseased leaves seemed to keep it at bay. The affected plants still had other leaves to help them continue growing, and they more or less recovered after the diseased leaves were removed a couple times.

The other leaf disease I had show up was powdery mildew. This primarily affected the swiss chard, and didn’t start until mid-May when the temperatures were consistently in the mid 80’s/90’s. At first I just thought the leaves were dusty, but pretty soon it was apparent it was more than dust, and on the undersides they were actually fuzzy!

I read that powdery mildew can actually occur when it is too dry (weird, right?!). So I trimmed off the diseased leaves, and then started spraying down the garden every day or two with the hose, to moisten things up a bit. This was in addition to the soaker hose watering. This actually proved to be a very simple and effective solution for the powdery mildew! (If a more aggressive treatment is needed, try spraying with potassium bicarbonate.)

The Garden Grows In Spite of these Garden Pests!

In spite of these various garden pests and diseases I’ve mentioned, the garden really has been doing quite well. I’ve been pleasantly surprised at how well things are growing – even into June when we’ve been over 100 during the days! I’ve been harvesting chard and kale, the tomatoes are ripening, the squash, cucumbers, and eggplant are all growing well! And, I’ve recently planted some malabar spinach and purslane – leafy greens that are supposed to be heat tolerant. I’m looking forward to more harvests soon 🙂

If you are curious to read about the beginnings of this little garden – check out my “Garden is Born” post! 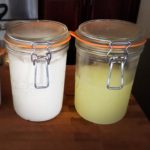 Our neighbor has a #kumquat tree, and invites us t

We overwintered our tomatoes this year and are enj