The spring garden has been under planning and development since December of last year. In order to expand our growing season before it gets hot, we started nearly all our veggies indoors under grow lights, to give them a jump start. This year, we are starting everything we grow from seed. At least, that is the plan and so far we have been sticking to it 🙂

(Side bar) Have you ever had that experience of wandering through the local nursery, and a plant just catches your eye? Well… that happens to us sometimes 😉 But we are trying to curb our urges, and plant from the seeds we have. Plus, I did add a number of new varieties to our seed catalog over the winter in preparation for this new spring garden. So it’s not like we are suffering from lack of diversity!

In addition to the new seed varieties, we are making some location adjustments based on what we learned last year about the sun patterns over our garden area. Hopefully after a few seasons, we will have everything dialed in and know what works well where. But for now we are still testing things out.

What are we growing in this year’s spring garden?

I decided to carry over a few of the Russian Red Kale and Swiss Chard plants from the fall garden. They are growing so well right now, and I want to test out how long they will grow for. Will they survive multiple seasons? Maybe I don’t need to be planting fresh starts every spring and fall…

Other Greens started new in the spring garden include:

*I planted those last two very early in the spring (February). My history with both lettuce and arugula planted in the spring, is that it gets too warm and the plants start to bolt before we have a chance to harvest much. The arugula we grew through the fall/winter worked well, and we will grow more this next year! So, it may be too late, and the lettuce and arugula may bolt before we get a chance to enjoy them, but I decided to try again. Both are in a relatively shady location, so we will see. To date, they are growing well.

I am also not sure about timing for the sprouting and leaf broccoli. This fall was my first time growing them, but they took a long time to start. (They really didn’t start growing until January.) So I am trying some fresh transplants to see how they feel about growing in the spring garden instead 🙂

We are trying some new pole beans on our arch in this spring garden that I am really excited about: Rattlesnake and Thai Purple Podded. Both are supposed to be heat tolerant, and produce long, thin, tender beans (up to 20 inches!) I can’t wait to see the arch covered with vines, and a colorful variety of beans hanging down… I’ll also plant some bush beans in early April (Provider). Those did pretty well last year, even as the temperatures ramped up.

The other smaller garden trellises have snap peas on them right now, which are doing pretty well and still producing. We planted those last fall (September and October). The plants were growing well and ready to produce by January of this year. This is the most success we’ve had with snap peas so far. I think the trick may be to plant them in the fall for a very early spring harvest. Prior years I have waited until early spring to plant them. By the time they are starting to produce pods, it is too hot and they basically shrivel on the vine 🙁

Once the peas are done producing I will re-plant one of these trellises with a cucumber (Marketmore 76).

Radishes, carrots, and onions are scattered throughout the garden. I also have a few large variety Chinese radishes that I am trying. They were a total fail during the fall (no bulb formation). I’m giving them another go in the spring garden.

Tomatoes have been a challenge for us so far. Many varieties have large and unwieldy plants, taking over our precious garden space and shading out other plants too much. We also don’t have enough sun in much of the garden to get good fruit production. So often, by the time they are producing fruit, it is too hot and they stop before they’ve really started. But, growing good home-grown tomatoes is something I am not willing to give up without a fight. So this year, we changed the location, and I found some new micro varieties to try. Supposedly, the plants stay less than one foot in size, and they produce prolifically. I have two types (five plants total), both are cherry tomatoes – one red and one orange. I am rooting for you, tomatoes! You can read more about these micro tomatoes here and here.

One of my favorite veggies to grow is eggplant. Last year I tried three varieties with decent success on two of them. This year, I am repeating the classic Black Beauty, but am also trying three new varieties! (1) Casper (a mild white variety that I’ve read fares well in our summer heat), (2) Rosa Bianca (a larger round Italian variety), and (3) Nagasaki Long (a long and slender Japanese variety that is also supposed to be tender, sweet, and quite heat tolerant). I am really excited to see how these produce, and to try some recipe ideas in the kitchen using them!

Last, but far from least, are our Chiles and Peppers. These can be found in abundance in our spring garden this year. A few of the plants are even over-wintered from our fall garden! Chile growing is Hubby’s project, and he is having a lot of fun trying new varieties, making hot sauces, etc. He is that person that will put fresh sliced chiles on nearly everything he eats, if they are available. If all goes to plan, we should have no shortage this season…

Varieties we are growing this year include:

Both of these sweet peppers are new varieties for us this year. Their fruit is of the smaller size, but they are noted to be highly prolific and flavorful. I love sweet peppers, and have been on the quest for a nice variety that will give me a generous long-lasting harvest. Hopefully, these will do better than last year’s! I have two plants each, so fingers crossed we like them…

When we started seeds

When did we start our seeds for all these lovelies? We started most everything in the first part of January (chiles, tomatoes, greens). The exceptions being the eggplants and cucumber. Chiles and tomatoes can be planted out in mid February. The rule of thumb here is to plant after Valentine’s day, as we rarely see frost after that point. I probably could have started the chiles even earlier, to get them to a larger size before transplanting. Next time, I will leave 8-10 weeks instead of 6! I will also fertilize the chile starts next time… All I did this year was transfer them to a larger pot with some compost and worm castings. However, a dilute feeding or two with fish fertilizer probably would have been good as well – it did wonders for a few of the late growing chiles, as well as the eggplant starts!

The greens I started in two batches a few weeks apart, more because I have limited indoor growing space than because I was trying to do succession planting. I have found that most things take off growing around the same time, regardless of if I stagger planting. Our spring season is too short to plant multiple batches for the plants that wear out from the heat. The plants that are more heat tolerant will keep producing and can be harvested from regularly, so don’t lend themselves to succession planting either.

I started the eggplants at the end of February, because I didn’t want to transplant them until it warms up more towards the end of March. Since the cucumber will replace the peas that are still producing, I started it in mid-March. I will keep it indoors until the peas fade, likely sometime in April.

Here’s a look at my planting calendar so far for this year:

What about the herbs?

The herb garden really deserves its own post, and I will save most of my description for that. Suffice to say that the herbs are THRIVING, and a real pleasure to have in our garden. Many of them grow year round here in North Scottsdale. There is nothing like having fresh herbs at your disposal! Rosemary, thyme, oregano, marjoram, lavender, cilantro, parsley, basil, dill… More to come on the herbs 🙂

Where we get our seeds

As a final note – you may have noticed that many of the links to the plant varieties we are growing point to Baker Creek Heirloom Seeds. We’ve found they have a wonderful variety to choose from. Many of them we have never heard of or seen in the local grocery stores. Take the three new eggplant varieties I am trying, for example. I have maybe seen Casper at a local farmer’s market, but never the other two. And certainly none of these varieties are available in the local grocery stores. Half the fun of growing your veggies is being able to explore new and novel varieties! In addition to the variety, we’ve also found their seed packets to be quite cost-effective. A plus when you are prone to over-order seeds because you just can’t make up your mind 🙂

I’ve also gotten seeds from Native Seed Search (read my full blog post on them here), and a few varieties from Johnny’s Seeds. I’ve been happy with the seeds from all these suppliers. So far we have always had good germination rates and healthy plants. 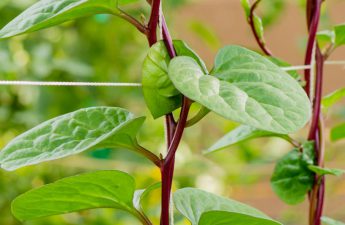 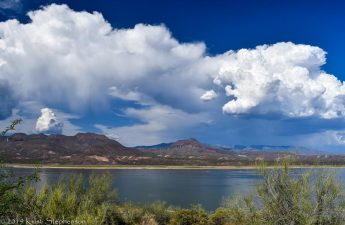 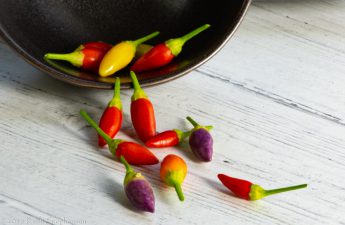 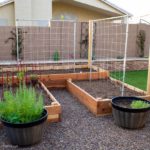 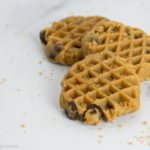 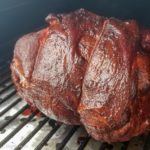 The radishes in the garden started to bolt ... Dec

Getting the dinner routine down! Two good pups wai

Starting the day off right with some morning puppy

Yes folks, this is a [single] green onion! Not sur

#snowclouds and #snowcappedmountains flying into D

What did I do with those two pounds of greens from

I harvested over 2 pounds of greens this morning,